What Is Justin Bieber's Real Name?

Born on the 1st March 1994, Bieber rose to fame in 2008 when future manager Scooter Braun stumbled across one of his videos on Youtube. Under the guidance of Braun, Bieber was introduced to the singer Usher and soon after signed a recording contract with Island Records.

His debut single, One Time, released in 2009, peaked in the top ten in Canada and charted in the top thirty of several countries. While Bieber's debut album, My World, followed in November 2009, and was eventually certified Platinum in the USA.

With a notoriously strong and loyal fan-base known as 'Beliebers', the young singer became the first artist to have seven songs from a debut album chart on the Billboard Hot 100.

His most famous single to date, Baby, released in January 2010, only increased Bieber's international status. The song was followed by the hugely successful album, My World 2.0, which went Platinum in the United States and reached the top ten in various countries worldwide.

Following the success of his second album, Bieber has embarked on a World Tour and released two remix albums, My Worlds Acoustic and Never Say Never - The Remixes. 2011 saw his first foray into the world of film, with the release of a 3D biopic/documentary, Justin Bieber: Never Say Never.

Anonymous answered
Justin's real name is Justin Drew Bieber! He's so amazing, talented, and sexy. If you don't know what he looks like then here's a pic. 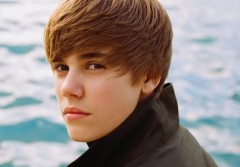 Savanna answered
Sorry to break your hearts but his birth name is Alexander Lawrence.

Anonymous answered
It is justin drew bieber and every one know that but the famouse name is justin bieber or jb  so I have his email address if you want it here is my email send me a messeg and give me your email then I will send you a messeg I will give you his email address or if you a girl give me your email and I will add you and we will alk about jb and I can give you his phone number too:d
xd

Anonymous answered
Fakers you no his Real name is justin!drew!bieber!

Anonymous answered
How about justin bieber? Thats his real name..unless your looking for justin DREW bieber. I added his middle name in there if you didnt catch on.

Anonymous answered
Um hello?? His real name is Justin Bieber!!!!!! Aw I'm so sorry fans but I am Gabriella  for crying out loud! I am serious!!!! His acctuall name is Alexander (alex)  Lawrence! I'm so sorry for all you huge fans and just fans! All stars have a stage name! Maybe not all but some do! And again I am trurly deeply Sorry! Ik you all thought it was justin drew or andrew Bieber (whatever you call him) you all have to understand that he has to have his own privacy in life and not have everyone calling like crazy on his cell! Even if he became famous that doesn't meen he has to lose or lost all his privacy and freedom! He still has it all but maybe a little less! Ik you all wish to meet him and stuff,he rlly wants to meet you all too but sadly he can't meet every single one of you guys! Some ppl get lucky n meet him but some don't n just stay normal fans!!! Ik you all love him so much, so do I he is so hot, I am a super huge fan!! I love you all so much and so does justin I meen alex and I sadly gtg but guyz just think bout what I just wrote! Would you like a tons million fans that you don't even know calling you and talking with you for like 2 hours!!!! I don't think tht! Byers  r

Kaibe Gargirello answered
I mean, I love him too.. But not like others. Some girls go wild over him personally I think it's just a waste of time to put together, I would love to meet him but I just don't have the money or anything. Get what I'm saying? I just don't think it's right.. Especially the girls who ask for his number! Like anyone would want to tell a stranger over the internet? Hell noo! Anyway I agree with Gabriella. Btw my name is Kaite Garg.

Anonymous answered
Justin has the same last name as his father, Jeremy Bieber of Winnipeg, Manitoba.  JB's name isn't a stage name.  It's the name he was born with.

Anonymous answered
HELLO why would he have a different name he gets called it live on t.v on stage interviews on radios and even with his mom soooo I believe its justin bieber

Anonymous answered
Justin bieber real name is justin drew bieber alew lawrence is just some guy on face book pretending to be justin bieber do not belive him and if you don not belive me ask pattie his mother!

Anonymous answered
Its justin drew bieber not justin andrew bieber or alexander lawrence of course not not to be mean or critical I mean I'm only 9 going on 10 but I still love justin that shouldnt be a problem and no one should worry about me jus worry about there selves and anyone who decides to judge you I say back off cause they don't need to worry about what think  they should just worry about their selves bye.

Anonymous answered
Of course it is Justin Drew Timberlake

Anonymous answered
Its alex lawrence ! His mom changed it !

Anonymous answered
I don't know but I need to now how much real live concert front row tickets are? Please help:(

Anonymous answered
It could be Justin Drew(Andrew)Bieber,or Alexander Lawrence.I don't know,I've heard a lot and I don't know whats true and not,all I know is that I love him,bye!

Anonymous answered
His real name is Alex Lawrence. He only says that it is Justin because he dosn't want the whole world to know.

Anonymous answered
Justin bieber real name is... He  is just so cute I want to marrie him so bad

Anonymous answered
They changed his name to make is more cool and his real name is justin john bieberson or somthing like that.

kandi cormier answered
No its Justin Drew Mallette I know him and no its not bieber I have him on my facebook and my dad works for a country singer so I get to see and not only that hang out with him and his family!!! IT'S NOT BIEBER ITS MALLETTE!!!

Anonymous answered
This is a twitter comment by PATTIE MALLETTE, justin bieber's mother!
Studiomama: Alex Lawrence is NOT Justin Bieber. He is pretending 2 be him again on facebook & spreading more rumors. Please RT and pass it on! Thx! :)
about 14 hours ago from UberTwitter

chelsa cute cheguel answered
The true name of justin bieber is alex lawrence!   It is not justin drew bieber duh?

Anonymous answered
Fakers you no his Real name is justin!drew!bieber!

Anonymous answered
I don't know y do you stalkers even care?

Anonymous answered
It is Alex Lawrence, trust me on this one... I know for a fact!

Anonymous answered
Justin bieber what is your real name