Who Is Miley Cyrus?

Cliff Marrero answered
She also is a teen sensation. My son is crazy about her. She has had the #1 concert to see. She has a successful show. Her songs are currently on the pop charts.

Anonymous answered
Miley cyrus is the greatest singer in the world! I am her BIGGEST FAN I love her! She is 16 and plays as hannah montana on disney channel and she is daughter of billy ray cyrus.

Anonymous answered
Miley cyrus is awesome I am her biggest fan in the whole wide world I will do anything to get tickets for a concert she was born november 23 plays as hannah montana has her own show on disney channel is daughter of billy ray cyrus does this information answer your question.

Anonymous answered
She is teen pop sensation HANNAH MONTANA, who has many adoring fans.
Miley Cyrus is daughter of Billy Ray Cyrus, the famous country singer.
Miley has her own show ,HANNAH MONTANA ,is very popular, as it premieres on DISNEY CHANNEL, a popular TV channel for kids.

aly answered
-GASPS- How do you not know who Miley Cyrus is?!?!?! Dude,you live under a rock if you don't know who she is!! Lolz,she's daughter of Billy Ray Cyrus,a famous country singer. Tried out for the role of "Lilly" when she first auditioned for Hannah Montana,then tried out for "Zoey". Which of course was going to be the name of Miley's character,but they decided to change it to Miley Stewart like it is now. Anywho,they told her she was to young for the role,but she never gave up and kept sending in try out tapes. Finally they called her and told her to audition agaisnt everyone and she had to keep auditioning a couple times and eventually at the age of 13 she got the part. She aired "Hannah Montana" on March 24,2006. The show all of a sudden became huge hit nation wide,and is now the most popular teen pop star.Hannah Montana is an Emmy Award-nominated American television series, which debuted on March 24, 2006 (like I told you before) on Disney Channel. The series focuses on a girl who lives a double life as an average teenage school girl named "Miley Stewart" (played by Miley Cyrus as you know) by day,and a famous pop singer named "Hannah Montana" by night, concealing her real identity from the public, other than her close friends and family.That why she can stay a regular girl when she isn't Hannah!!
Help at all? I tryed to get all the information correct to help you and hopefully you understood!!!

divadoll diva answered
Miley cyrus is a teen singer and is the daughter of billy ray cyrus.

awesomely awesome answered
A sad excuse for a girl

Bella Almeida answered
Oh my god you don't know who miley is!!!

Anonymous answered
If you do not have cable you can see her show every sat. Morning during the teen shows instead of the cartoons. Hannah Montana and Miley are the same person. She is a singer and she has sold out concerts!

Kelly L. answered
Miley cyrus is a singer that acts on the show Hannah Montana
She is one of the most known people right now(my opinion)

Anonymous answered
The BIGGEST childrens singer at the moment. AkA Hannah Montana! Billy Ray Cyrus is her Father!!!

Maria Secara answered
You don't know who miley is?! Sorry, anyway, miley is a singer song writer! She is 16 and she is said to be the populist teen in the world!! Know you know how miley is!!

Lisa Benett answered
She is the girl who plays Hannah Montana on Disney channel. She also sings. I personally do NOT like her. I like one of her songs tho...Party in the USA.

Anonymous answered
Well she is the cute girl that walks on that red carpet.she is only 17 years old

Thaman Chhetri answered
Teen pop sensation Miley Cyrus is an American pop singer, songwriter and television and film actress who rose to fame after starring as the title character in the Disney Channel series Hannah Montana.

kimberly olmos answered
-GASP- You do not know who Miley Cyrus is... She is Billy Ray Cyrus daughter(the famous country singer)...She was 13 when she started Hannah Montana...Now she is going to start her last season in June and then she is going to retire from the show-biz...And didn't you hear she just bought a $1 million house!!!

Anonymous answered
OH MY GOSH AS IF YOU DO NOT KNOW MILEY CYRUS???
She is the daughter of Billy Ray Cyrus and Tish Finley Cyrus. She plays MILEY STEWART in the HANNAH MONTANA series. She made a movie called the hannah montana movie! She has an older brother named Trace, an older sister named Brandi, an older half-brother named Christopher, a younger brother named Braison and a younger sister named Noah. She was born on November the 23rd, 1992. She was at the age of 12 years old when she auditioned for the role of Hannah montana. She grew up in Nashville, Tennessee. JUST TO LET EVERYONE KNOW IF YOU DO NOT KNOW MILEY CYRUS YOU SERIOUSLY HAVE SOMETHING WRONG WITH YOU!!!

Taylor ?!?! answered
Miley Cyrus is a pop singer for disney channel. She had adi tioned for the role of Hannah Montana when she was 12. She has been on Hannah Montana for over 7 years now, and she is now doing her last season Hanna Montana Forever. When she is done with the season, she will retire. That is Miley Cyrus! Thanks for asking!

Your Worst Nightmare Ever answered
She is daughter of Billy Ray Cyrus . She has her own show called "Hannah Montana" and was born in November 23 , 1992. 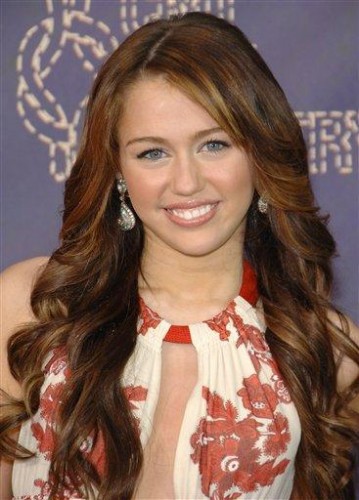 Anonymous answered
She is a singer. And a tv actress. Who plays on a disney show. She is the daughter of billy ray cyrus.

Anonymous answered
She is a teenage singer and I AM her best fan! BTW you got to know her!now you do!

Bethan You-don't-need-to-know answered
Miley is one of the best singers in the world! She stars on Disney channel in Hannah Montana and is way better than the Jonas bro's. Know her now?

Anindita Ghosh answered
She is a 16 year old pop singer...who has her own T.V show called "Hannah Montana"...which is too very popular...she is also the daughter of Billy Ray Cyrus...

Anonymous answered
Miley is a a bad singer. Bad actress. Bad example for kids. And a bi. Does answer your question?

miley cyrus answered
Excuse me jonasfan12 I'm miley cyrus! And I'm sorry what I'd done 4 the kids! N yes I was a bad example!!! So I'm stopping to do that! And miley cyrus (me) is the daughter of billy ray cyrus! And she has her own show called hannah montana!!!! Its on disney channel and abc 13! (the hannah montana show 4 abc 13 is @ 9:00 I think!?) and my movie came out its called: Hannah montana the movie! Its about which life she has now and the life she didn't have back then! And.... I won't tell you what happens! Go see it! Bye 4 now! (you could add me as a friend if you want! I love being my fans friends! :d