Who Played Catwoman In The TV Series Of 'Batman'?

Will Martin answered
Of all the villains who terrorized Gotham City in the 1960s Batman series, Catwoman was the most spectacular. She was originally played by Julie Newmar (who Batman star Adam West later admitted was his favourite) and later by Eartha Kitt, with Lee Meriweather doing a brief stint. 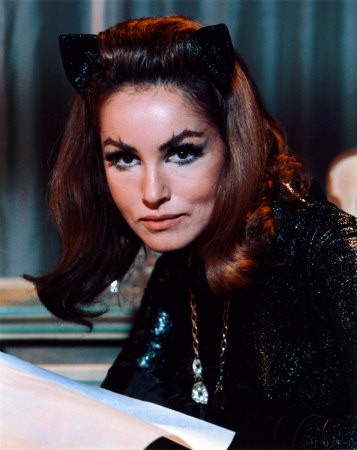 Whoever played her, Catwoman was invariably dressed in leather, and invariably spent much of the episode making eyes at Batman in between intervals of trying to murder him. There is an underlying hint that, if she wasn't an "arch criminal," Batman might have been interested in returning her advances.

Despite the Catwoman love interest, rumours persisted that Batman's home life as Bruce Wayne, living cosily with his underage friend Dick (aka Robin, played by Burt Ward) was a trifle suspect. This was one reason why Batgirl was introduced in a later series. However, despite a sexy performance from Yvonne Craig, Batgirl didn't really win over audiences.

Victoria Luisiana answered
Julie Newmar and later on it was Eartha Kitt.

Noah Workman answered
If I gave that information out it wouldn't be good because then Catwoman's secret identity would be out...